Some of this may be old news to some of you, since I engineered a deliberate leak at Halloween, right after I signed the contracts – but since it has ‘officially’ officially gone out, I thought it was a good idea to post it here. When you combine the finally-about-to-happen Complete Essential Starchild book, the last Imaginarium Geographica book (THE FIRST DRAGON, out in November), and a couple of other things that may happen depending on my health and relative caffeine levels, with the press release below, it becomes apparent just what kind of effort goes into the making of an Epic Year.

Last year began with a lot of industry insiders basically declaring that it would be very difficult in the current publishing climate to sell a new book, much less a new series. The year ended with my having sold not just one but two series, in what was the single biggest deal of my career.

You get to decide what your destiny is. You. And I decided I wanted my destiny to be Awesome. Go forth, and do likewise. 😉

James A. Owen, author of the Chronicles of the Imaginarium Geographica series, is also the creator of the critically acclaimed StarChild graphic novel series, and the author of the Mythworld series of novels.

The Mediations trilogy (Drawing Out the Dragons, The Barbizon Diaries, and The Grand Design), will be published in hardcover editions with two-color illustrations, and will be released in the spring, summer, and fall of 2013 (respectively). The first book, Drawing Out the Dragons, was originally self-published in 2011, with limited distribution. The publishing deal with Shadow Mountain will now allow the book, and its subsequent two volumes, to receive national distribution and marketing.

Additionally, the first volume of Fool’s Hollow will release in October 2013. Both the fiction and nonfiction book series will be anchored by a national speaking tour by Mr. Owen along with appearances at BEA, ALA, Comic-Con, and other venues, and will include a new author website and blog.

In the Mediations trilogy, Mr. Owen shares his personal story and path to becoming a full-time author and illustrator, which readers agree is insightful and inspiring. Filled with stories of overcoming challenges and even illness, with self-learned truths, these books are designed to challenge thinking and increase the reader’s desire to live an extraordinary life. Drawing Out the Dragons has gained a strong fan base and has been favorably compared to such inspirational classics as The Last Lecture by Randy Pausch.

The five-volume series of Fool’s Hollow serves as both a literary homecoming for Mr. Owen as well as a starting point for a bold, new adventure. Two decades ago, Mr. Owen began a graphic novel series entitled StarChild, which was never completed. Fool’s Hollow will be a grand retelling of—and completion of—the StarChild saga and will include dozens of all new, original illustrations. “Fool’s Hollow is the work closest to my heart,” said Mr. Owen. “Through writing and illustrating the Imaginarium Geographica series, I gained experience as a storyteller, and I feel that now is the best time for me to return to a story I love and tell it in a new way as a series of illustrated novels, and to finally finish the story that started it all.” Mr. Owen will also serve as the primary Art Director on the books.

Mr. Owen is also in discussion with executive producer Mark Ordesky and associate producer Rick Porras, of The Lord of the Rings movie franchise, to develop Fool’s Hollow as a CGI film. He is also collaborating with musician S. J. Tucker to produce an album of songs inspired by the books. Storyboards and preproduction designs are being developed concurrently with the books at Mr. Owen’s Coppervale Studio, and maquettes for the film have already been sculpted by lead designer Jason Warren.

“Shadow Mountain is excited to welcome Mr. Owen to our publishing family,” said Chris Schoebinger, Publishing Creative Director for the publishing house. “James Owen is a master-storyteller with a penchant for bringing out the best in people. We look forward to a long and lasting partnership with him.”

All eight books by Mr. Owen were acquired by Chris Schoebinger from Shadow Mountain and will be edited by Lisa Mangum. The deal was negotiated by Mr. Owen and by David Schmerler of Loeb & Loeb. In addition to Mr. Owen’s literary works, he is also founder and executive director of Coppervale International, a comic book company that publishes magazines and develops and produces television and film projects. He lives in Arizona. Visit him at jamesaowen.com. 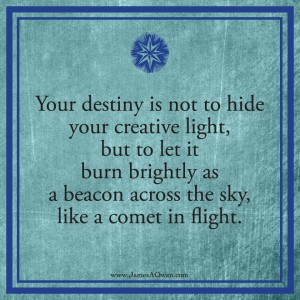