One of the reasons I adore the movie “A Knight’s Tale” is because the character of Will is so very close to what I believe is an ideal role model for anyone striving for excellent and aspiring to greatness. He is born with nothing of value in that society except some innate skills – which are not valued in those of the peasant class – and the will to do something with them.

He believed himself to be the equal of the “nobles” of the story, and then, in word and deed, proved it to be true. He defied every convention to earn more and more opportunities to prove himself – and even when it seemed all was lost, and he would lose everything he had gained if he did not run – he stayed, and in doing so earned his nobility, his greatness, in title as well as action.

As the prince said to him, “You tilt when you should withdraw – and that is noble, also.” He never gave in. He knew who he was, and held to that belief, even when everyone around him said that it was not possible. And he won.

That is the crux of everything I try to teach: it is, finally and always, an individual choice. That determination is one of the few things no one – no one – can change unless you allow them to. Is it defiance? Sometimes, sure. But none of the obstacles you overcame are important when you win. And no one can make you stop if you still have the will try keep trying. No one. No one. No one. It is entirely up to you.

If you decide to stop, if you decide you can’t push any longer – that is also your choice. But don’t make it because someone else told you that you should. Decide what you want. Plan a course of action to make it happen. Then put in the effort to make it so. And never, ever, stop, unless that’s what you really want. 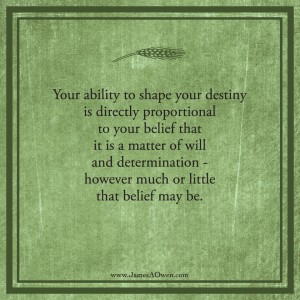