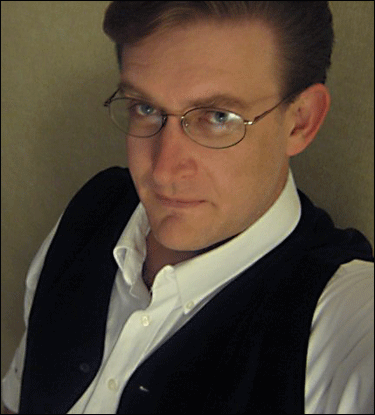 James A. Owen is founder and executive director of Coppervale International, an art and design studio that also published the periodicals International Studio and Argosy, develops television and film projects, and is redesigning an entire town in Arizona, among other ventures. James has written and illustrated two dozen StarChild comics, the award-winning MythWorld series of novels (published in Germany and France),  the bestselling series, The Chronicles of the Imaginarium Geographica, the inspirational nonfiction book Drawing out the Dragons, and more.  More than a million copies of his publications are in print, and are sold all over the world.

James began his career in publishing approximately two years before he was old enough to get a driver’s license, and was the youngest publisher ever to be an exhibitor at the San Diego Comicon. He founded Taliesin Press in 1992, both writing and illustrating the company’s debut publication, a Dickensian comic book titled StarChild.

In both 1994 and 1995, James was named to trade magazine Hero Illustrated’s list of the one hundred most influential people in the Comic Book Industry. On July 17, 1995, to coincide with the 40th anniversary of Disneyland’s opening, Taliesin Press was renamed Coppervale International — mostly because no one could pronounce Taliesin and those who could kept asking James if he could design buildings instead of comics.

During the fall of 1995, Coppervale negotiated a marketing arrangement with direct market distributor Capital City that pushed the company to international prominence, which led to an invitation by industry leader Image Comics to co-publish the new StarChild series, Mythopolis. The two dozen StarChild comics James produced remain in print as the six-volume Essential StarChild set, and are being re-released in the spring of 2013 as the one-volume Twentieth Anniversary Nearly-Complete Essential StarChild.

Before the turn of the millennium Coppervale also secured publication rights to the century-old arts magazine International Studio, which debuted in the spring of 1999. After the turn of the millennium, International Studio was relaunched along with a high-end revival of the periodical Argosy, both of which won many design awards in amounts inversely proportional to the amount of money the magazines made. They won a LOT of awards.

The first book in a series of prose novels written by James titled Mythworld (Kai Meyer’s Mythenwelt in Germany) won the 2003 AI award for Best Novel, and was nominated alongside books by Stephen King and Michael Crichton for the prestigious Phantastik Prize for Best International Novel. Steve won, but James got more votes than Crichton, so that’s okay. As of May 2012, MythWorld Book One: The Festival Of Bones and MythWorld Book Two: Invisible Moon are available in English as an ebook from the Coppervale International website, with further editions to follow. 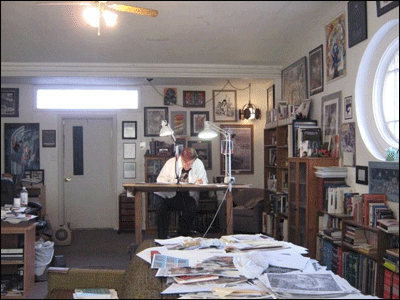 James has written and illustrated six books in the bestselling series The Chronicles of the Imaginarium Geographica: Here, There Be Dragons; The Search For The Red Dragon; The Indigo King; The Shadow Dragons; The Dragon’s Apprentice; and The Dragons of Winter. The series is now being published in more than twenty languages. A seventh volume, The First Dragon, will conclude the series in November  2013.

Often asked to speak at schools, James rarely discusses his books, instead choosing to focus instead on stories drawn from his own life – examples of overcoming obstacles and adversity, about how making choices in life is like drawing a Dragon and how he came to do what it is that he loves most in the world for his job. These stories were made available to James’s readers in Drawing Out The Dragons, a non-fiction collection that was released as an ebook, and thanks to an over-funded Kickstarter project, is also available (in VERY limited quantities) as a hardcover and paperback from Coppervale International.

Drawing Out The Dragons is the first in a series of three books called The Meditations. DotD, along with the other two volumes, The Barbizon Diaries, and The Grand Design, are currently available as ebooks from James’ Coppervale International.  Print editions are forthcoming.

James is also in discussion with the executive producer and associate producer of The Lord of the Rings movie franchise, Mark Ordesky and Rick Porras, respectively, to develop Here, There Be Dragons as a live action film.

All of these projects are being developed at the Coppervale Studio, a 14,000 square foot, century-old restored church in Northeastern Arizona, which is managed and run by James’s brother Jeremy.