…for me, was a small, slender, two-color, beaten-up hardcover copy of James Allen’s AS A MAN THINKETH, which had belonged to my mother in college.

In a book full of quotable, livable passages, one stood out to me: “Circumstance does not make the man; it reveals him.”

As true as this is, there are always two sides to this particular kind of revelation: what the circumstance reveals to ourselves, and what it reveals to others.

For ourselves, circumstance often reveals both our strengths AND our weaknesses, the ways in which we have chosen to compromise or not, to accept a lesser self, or not, and give circumstance the blame for all of it. Where our weaknesses are concerned, we often tend to tell ourselves that there will always be a better, more ideal time to be our best selves; that we could do better, BE better, if only something about our circumstances were better. Where our strengths are concerned, we take the revelation as a surprise, as something that we didn’t believe was possible until circumstance forced the choice.

That isn’t how it works, in either case, because both responses are CHOICES to use, or not use, the qualities that are already within you — but those revelations, and your perceptions of them, are ALL that really matter, because the things that you choose to believe — and act upon — about yourself are your CHARACTER. All the rest is reputation, and the opinion of others, which is always and forever none of your business and out of your control.

What we do is who we are; and, as a mentor of mine recently remarked, “No one ever does anything that’s out of character.” I responded to this statement with some chagrin, and he clarified what he meant: anyone who is offended by such a statement probably has said or done something to which they then added the disclaimer, “That is completely out of character for me.” But nothing we ever do, is. When we say that, it’s because we expect to be judged, harshly, for what we have chosen — and not by ourselves, but by others.

What creates the greatest stresses and tensions in our lives is not the conflict between what we want and what we do, but between how what we want and choose to do may conflict with the expectations others around us may have. When I feel — or someone around me believes — that I have done something out of character, that feeling is more often tied to their expectations than it is to my own personal convictions.

Let me offer an example to illustrate the idea: my daughter and I both have asthma; we both have difficulty participating in sports activities or even things like stage performances because the exertion often brings on an asthma attack — and for both of us, as with many other asthmatics, the quickest, fastest solution to put a halt to that is a hefty dose of caffeine. Energy drinks often work for me, but a strong cup of coffee works for both of us.

We have also both been raised in a community and in a specific religious background where, among other things, coffee, specifically, is verboten, and drinking it is considered by many friends, neighbors, and relatives to be at best a sign of weak character, and at worst, a mortal sin.

At a recent performance of a play my daughter was in, I mentioned to a friend how we had to bring her coffee during the intermission so she would have the lung capacity she needed to get through the solo and dance numbers in the second act. The friend could not control her response, which was equal parts revulsion and disappointment, which she then articulated in a brief reprimand in which she basically said, “…I expected better of you.” She was saying, essentially, that making such a choice was “out of character” for me — as SHE perceived it.

I asked what she believed my and my daughter’s alternatives were, and explained the particulars of how an asthma attack worked, and why, medically, taking a fast-acting, liquid dose of a stimulant such as caffeine would ease the effects of the attack, and, in a bad case, possibly even be life-saving. She relaxed considerably after I also mentioned that it had been fully endorsed by a doctor whom she knew well, and who held the same specific religious beliefs about drinking coffee.

“So, it’s for medicinal use, then?” she asked. I nodded. “Well then,” she said, beaming, “that’s all right then. As long as you aren’t ENJOYING drinking it.”

Her assessment of what I and my daughter had chosen to do for ourselves had NOTHING to do with her, and had NO affect on her life or beliefs. But our choices were something she felt were within her purview to judge, and that is something that happens to all of us, every day, in ways large and small. There are many people of similar beliefs who would judge this scenario differently; and far more people who would not judge it at all. There are also those who would judge it MORE harshly. And NONE of the judgements those kind of people make matter unless you choose to allow it.

When my daughter or I need the caffeine to stop an asthmatic reaction, we locate the closest source of caffeine and drink it. Full stop. To hesitate, to do something else, anything else, because that choice might be somehow a disappointment to one, ten, a hundred, or a thousand other people would be, frankly, stupid. And neither my daughter nor I are stupid. But how many other circumstances have I been in where I chose EXACTLY that? Where I chose to do something — or not — and acted not because of my own beliefs, desires, and convictions, but because of how those choices would be judged by others?

If the judgment of others is what you want, there is no shortage of people willing to step up and take a swing at you for whatever it is they can find to judge you about. If improving your character is what you want, then there is no shortage of circumstances available for you to experience to find out who you really are. Reacting to the former is entirely about hiding who you really are out of fear; responding to the latter is all about growth and embracing who you already are.

How we respond to circumstance reveals us to OURSELVES. It reveals to us the weaknesses we believe we should try to improve upon, and the strengths that we were not certain we possessed until we needed to call upon them. Regardless, the revelation is meant for us and us alone, to better build our character so that we can focus on fulfilling our purpose — and NOTHING about that purpose involves the harsh judgment of our own choices. Only the acceptance that what we do is who we are, the understanding that our own expectations should guide us more than those of others, and the belief that every moment, every experience, can be an opportunity to learn and do better, matter. And that’s all. 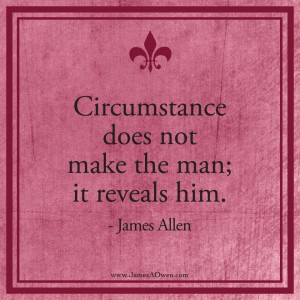