….and your Signal never changes. Only your choices about how to respond to it do.

Signal comes from your heart, your inner core, the center of who you really are. Your choices come largely from your head, and are often based on circumstance, memory of the past, anxiety about the future, and a variety of things that have far less to do with your Signal than it sometimes seems. This is because most of the choices we make in our lives are fairly consequence-free, and fairly irrelevant to the bigger picture of our lives. But some of the choices, the big ones, have everything to do with it. And the worst part is, we often don’t realize that until the moment — which is the only time we actually live in — is past.

Your Signal, who you are, what you want, what you hope, dream, and aspire to be, is something you already know. But the clarity is sometimes muffled by the choices we make, and the Signal isn’t always clear. Clarifying the Signal is the purpose of obstacles, trials, and adversity of every kind — because it is only through facing adversity that we can understand how crucial, how critical, some of our choices really are. Sometimes, we only listen to our own Signal when we are forced to do so — even then, the decision as to what course to take must still be chosen.

In the past several months, I have been faced with a number of choices that in my heart, I knew were important, and more, necessary to becoming who I want to be; to be the person whose choices are in harmony with my inner Signal. But had I made some of those choices sooner, when I believed I should have, I also believe I could not have endured the consequences they would have brought about. I simply was not prepared. And then, through a series of crises, I found myself having to make some of those choices whether or not I wanted to, and had to decide, in those moments, if I could bear them, and the consequences — and I found that I could.

More importantly, I found that facing those crises, bearing those choices, and shaping myself to live with the results has brought me closer to being in harmony with my Signal than ever before. Would I have liked to have made that progress without enduring the crises? Absolutely. Do I think I could have borne up under the pressures those choices brought to bear as well as I have? Absolutely NOT.

It took enduring the crises to find out I had the strength to bear the choices I wanted to make, but didn’t have the strength to make — and which I would not have had the strength to endure, had I simply made those choices with my head, out of fear, or anxiety, or for whatever reason that hadn’t resonated strongly enough for me at the time. That’s pretty zen, for me: I could not stay on the path I believed was mine without choosing to, but choosing was too difficult until I was forced to choose, which resulted in my making the choices that made me more worthy to be on the path I wanted, but hadn’t earned.

Whether or not I will return to that path is yet to be determined. But one thing is certain: I see it more clearly now. And I am stronger than I would have been otherwise. And I know, more than ever: Everything Is Signal. 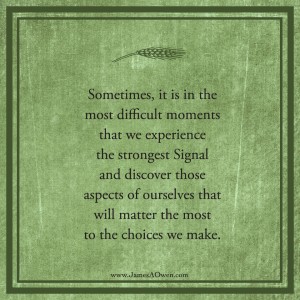