A couple of months ago, I wrote some very difficult essays, including one, “A Force Of Nature”, that one of my closest friends said was the most important thing I’d ever written. It dealt with some very hard and painful issues in a very direct way — and it surprised, and even shocked some of my friends and readers, who were concerned that the Awesomist might also have doubts at times, and might also have struggles. That gave me pause, because I was worried if showing that much of myself, being that open, was hurting the optimistic, hopeful messages that were my more frequent proclamations. What I’m realizing now is that it simply made everything else I was saying stronger, and more valid, because as of today, after just a couple of months, the reader mail for “A Force Of Nature” has exceeded the quantity of mail I’ve gotten for everything else I’ve written combined in the last year.

Something I had largely written for myself, which I then just propelled out into the ether, has been a significant factor in several people making the brave choice to not take their own lives, and to get the help that they needed to become who they really are; and a couple of hundred people have cited it as being hugely meaningful to their lives and their choices. I wrote it for myself, but I shared it with all of you, hoping it would be helpful in EXACTLY that sort of way.

I have learned to become more and more open about my own human experience not only because it is a good form of self-therapy, but also because sharing those stories is how we connect with and relate to one another, just as Henry says in his quote below. Very soon, I’m going to be sharing, as part of a new book release, some of the biggest of my own personal stories, which only a handful of you have had the chance to read before.

But, I’ve also learned the importance of sharing the smaller stories, too. Not every story has to be world-changingly large to change someone’s world. It can be those simple comments, those brief gestures, the seemingly insignificant things that bring a smile to someone’s face, or lift them up, and raise their spirits, so that they are better able to perceive and embrace the joy that is all around them, if only they find the strength to lift their eyes and look for it.

Sometimes, you are that strength; and that small gesture, the boost they needed. My good friend Tom Leveen﻿ once advised (I’m paraphrasing from memory, but the intent is clear), “Tell them you love them. Just tell them. You can joke about it. You don’t have to be serious about it. But make sure you say the words.” I tend to say those words a LOT, to just about everyone I’m close to in any way. In the past several years, I’ve lost a number of people I loved, and experienced that terrible, horrible regret of “I was going to call them, but…”

That’s when I realized how right Tom was. There are lots of reasons we might choose to not say or somehow express those feelings, but for me, my feeling is if I woke up tomorrow and that person was somehow gone, would I regret not having said those words? And so I do. Again, and again, and again. For me, and also for them — because I’ll never know when they might have one of those moments where they need to read just those words. And I want the words to be there waiting if they do. If they don’t need them, then I simply told someone I love that I loved them, which makes my day better, and insures me a little against the regret of not doing it, and later, too late, wishing I had.

That’s why I write and share the essays that I do, and these posts, and soon, a set of books that I hope will always be there for the people who need what is written in them. So that in those most difficult moments, someone can look up and read something that lets them know they are connected to someone who believes in them, that they aren’t alone.

Sometimes, that’s a very small thing. And sometimes, it’s everything in their world, in that place, in that moment. And I will not let them fall. 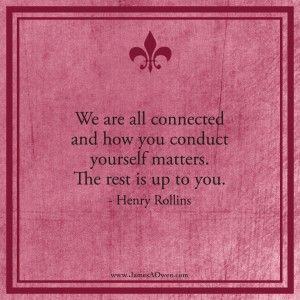