The book I’m currently finishing, the first in the Fool’s Hollow series, with a story that spans my entire career, is the hardest thing I’ve ever done. There are lines in it I wrote when I was sixteen; there are several thousand words in it I wrote just today. It’s been a day away from being finished for several weeks now — but more questions arose; more story conflicts; more plot points that needed resolution; more characters who needed purpose. And as of yesterday, it finally felt like it had the shape it needed to have, and I’m knocking out the scenes one by one, and it’s joyful and agonizing all at once.

I have NEVER gone through this process in this way. My revision of the first Imaginarium Geographica novel was done in one night (they told me afterwards they’d allotted eight weeks). Writing other books sometimes went slowly; revision NEVER has. Sometimes, as with the last IG book, writing went quickly — I wrote a third of the book in 2 1/2 days, and there wasn’t much that needed revising. But this one has been rough.

Granted, it’s a big book (for me) at 100,000 words; and I only got the editorial letter in early January. But along with being seriously ill during almost ALL of February and March, I’ve also gone through a lot of personal upheavals involving my family, my career, and other personal issues that have also allowed for some significant personal growth and transformation — and created some of the greatest grief and heartbreak I have ever experienced. And ALL of that is all over the pages of this book.

There is a passage in the book that basically states that “It’s impossible to create and share a new story if your own story is broken”, and I think that’s true. I think my own story had been broken in a lot of ways — and some were fractures that began decades ago, that I was unaware even existed — and until some of that could be mended and healed, finishing something I have been so invested in for so long was simply not possible. That I’m getting close to finishing it proves that healing has occurred; that it’s still so difficult shows that more healing is still necessary.

Every page is another expression of joy; every page is another moment of heartbreak; both have made it so terribly difficult to finish that even working on it has been a conflict of emotion: I can barely stand to work on it; and when I do, I can barely stand to leave it. But, Heaven willing, it will be done soon, and I can move on to the next volumes, which I am actually really looking forward to — especially Book Three.

I had always believed that the nonfiction books, The Meditations, were the most personal and introspective books I would write. I was wrong. This one, more than any other, has drawn every ounce of strength I have, and I hope that the story will resonate with the readers who find it.

What has let me move forward has been a shift of focus, away from the things I fear, and towards the things I love. Love of the work; love of the people in my life; love of the choices I still have to make. And, at the end, I think that’s going to be the heart of this book as well. And maybe it always was. 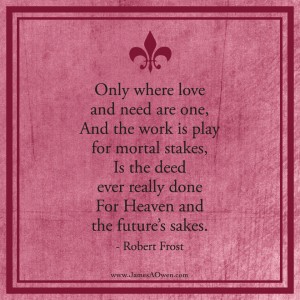