Dag Hammarskjold wrote, “In any crucial decision, every side of our character plays an important part, the base as well as the noble. Which side cheats the other when they stand united behind us in an action? When, later, Mephisto appears and smilingly declares himself the winner, he can still be defeated by the manner in which we accept the consequences of our action.”

That victory can only be achieved by accepting the entire truth of your story; by owning your choices; and by using the experience to grow and be an example to others. Omitting the parts that are hurtful, or difficult, or shameful means presenting an untrue story — to others, but especially to ourselves. It presents growth without trial; progress without struggle; and the appearance of something that can never truly be meaningful, because it simply isn’t real.

Everything real requires effort and choice. And sometimes, the the deepest meaning in our mythologies isn’t found in the celebration of our noble choices, but in the acceptance of our lesser ones — and in our willingness to allow that acceptance to change us for the better. 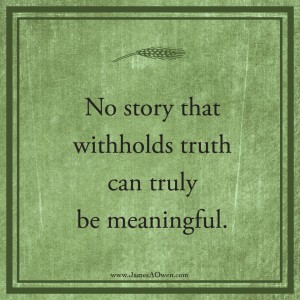