Everyone is passionate about something, and within the pursuit of that passion lies your path to Awesomeness.

It doesn’t matter what it is that you’re passionate about. What matters is that you are, and that isn’t random. The things you want most to be involved in doing, making, bringing about, are your Calling. Those things are why you’re here.

Yesterday, I watched a YouTube video with my son — it was about fishing tournaments. There was not really anything different about how the whole thing was carried out. I mean, it’s fishing. But the announcers treated it with respect and reverence. The participants were deadly earnest about every aspect of the game: the lines, the lures, the bait, the weather, the terrain… It was fascinating. And then, the announcers made a comment about the fisherman in the lead, that his pulling ahead in the competition was not a surprise, because he was “…A Living Legend of Bass Fishing.”

Until yesterday, I hadn’t realized there was such a thing. But there is. And that guy was just covered in Awesomeness, by doing his thing. He followed his passion, and to a lot of people, he has become legendary for it.

I tell creative people that they should follow their own passions in the work they do, because on a planet with over seven billion people, all of whom are becoming increasingly interconnected, they ought to be able to find enough of them who share those same passions for that author or artist to make a good living.

And if you work hard enough to be good at what only you can do best, and you reach out and find enough of those people, you too can become legendary. Just like a Bass Fisherman. 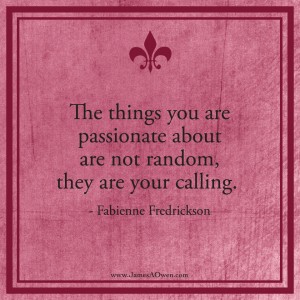