I’ve read a lot of well-meaning posts and essays lately by people trying to point out that not everyone is cut out to be an Artist-Author-Astronaut-Fill-In-The-Blank, and that it would be a kindness, an act of decency, to convince those who aren’t up to the job to simply stop pursuing it. To stop working, striving, trying, hoping. I absolutely agree with the first part, and completely disagree with the second.

Not everyone has the chops to do whatever they want – you might love whatever it is you’re trying to do, but it may very well be impossible for you to make a viable living doing it. The reasons aren’t all that important. What is important is that the decision to stop pursuing that goal is something only you can decide. You, and no one else.

It doesn’t matter if everyone around you tells you what you want is impossible – unless you believe them. While you believe in what you are striving for, it is always possible; it can come to pass. Anyone who tells you otherwise is probably an expert – and experts can be wrong. It may not work out for you; or it may take decades. People may call you a fool to pursue it – but again, that doesn’t matter. It will never matter, as long as you stay focused on your goals, work hard, and believe.

Success is not guaranteed; it never is. But if you decide to stop, then success will be almost impossible – and the only difference between it being possible and impossible is you deciding to agree with the experts who are telling you it can’t be done.

Experts just like the ones who told me I would never sell every book I’ve ever sold.

Opportunities can be blocked; resources can be taken; you may face active, hostile, vocal opposition – but while you still believe in yourself, it’s not over.

There are those who will say that encouraging this sort of idea will just result in a flood of books, art, comics, and whatever else that isn’t of a professional caliber – and that’s possible. It may also result in some works of genius, of real value, that may not have been created otherwise. If I’m erring in my counsel, I’d prefer to err on the side of hope, and encouragement, and in belief that everyone has something of value to contribute during their lives, rather than deciding I’m some sort of gatekeeper who tries to tell someone that they can’t cut it, and never will. I’ll be open in my critiques, and blunt (but gently diplomatic) in my assessments of the opportunities they can work towards, but I’ll never deliberately tell someone they should stop pursuing their dreams.

If anyone says that to you, your response, not their belief, will determine your future. 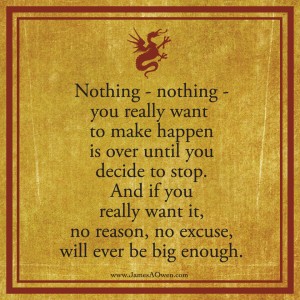