Your time and energy are finite; the former is irreplaceable, and must be used moment by moment as they occur. The latter is renewable, but only if you allow it to happen. It’s very much like one of the early design obstacles the Tesla electric car company had to deal with: the car operated on a block of hundreds of lithium batteries that could be recharged — UNLESS you ran it all the way down to empty. Then it died completely, and could not be recharged AT ALL. That’s a pretty good metaphor for the proper use and allotment of one’s personal energy: you can always renew it, but only IF you don’t drain it all the way to the bone.

Sometimes our commitments and obligations seem to require more of both our time and energy that we have — but that’s not always the case. Sometimes, we use our precious time and deplete our valuable energy in the service of people and presumed or inferred obligations that don’t really merit that level of commitment. It’s possible for people to want to simply drain everything you have to give, and then demand MORE. And in trying to service them — whether out of a feeling of obligation or simply because you want to be seen as the honorable guy — you lose the use of that time and energy you could be, you WANT to be, using for the things that are not merely obligations, but which renew you rather than drain you. In short, to do those things which keep you in the FLOW.

The Wikipedia definition of Flow says: “Flow is the mental state of operation in which a person performing an activity is fully immersed in a feeling of energized focus, full involvement, and enjoyment in the process of the activity. In essence, flow is characterized by complete absorption in what one does…flow is completely focused motivation. It is a single-minded immersion and represents perhaps the ultimate experience in harnessing the emotions in the service of performing and learning. In flow, the emotions are not just contained and channeled, but positive, energized, and aligned with the task at hand…Colloquial terms for this or similar mental states include: to be in the moment, present, in the zone, on a roll, wired in, in the groove, on fire, in tune, centered, or singularly focused.”

We aren’t meant to live our lives only giving. We’re also meant to receive. And if the things you spend your irreplaceable time doing are only draining you to the point of turning you into a dead Tesla, and are doing nothing to renew your energy, then something is amiss.

I’m speaking from recent experience — and I’m trying to refocus everything I’m doing to align with being in the Flow. This will make some people uncomfortable, and some people unhappy — and that’s okay, because those people are also the ones who hadn’t cared whether or not the battery was drained as long as they got all they could get, and people like that are just obstacles to living in the Flow. The people who will understand and accept the changes I’m making I don’t worry about, because they already do. And once you’ve begun making those kinds of changes in your life, you can’t imagine why you ever thought living otherwise was acceptable to you.

Still, it’s a hard thing to choose, and everyone’s mileage varies. But it is a choice, and one I’m making with all the renewable energy I have. Go thou and do so likewise. 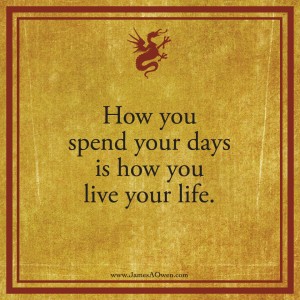