Most things that are true also aren’t very complicated. One truth which is easy to grasp but harder to implement involves the concept of self-improvement. Most people waste huge swaths of their lives trying to work out all the ways they can improve their lives, become their better selves, and aspire to Greatness. But really, it’s simpler than it seems. As with my Secret of Art, it’s comprised of only two steps.

Step 1: decide what is necessary to become your greater self.

Doing will take effort; great effort. That is a given. Most people who want to improve their lives are willing to work — but that’s not the problem. Where most people stumble is in simply acknowledging just what it is that has to be done. They tell themselves it has to be more complicated; that the process is much bigger than they are able to grasp. They come up with every possible reason that it can’t be started except for the real one — that they simply don’t want to do it.

Deciding to do something can be immediate; implementing the changes will take more time. I can walk to Canada, if I chose: but not if I’m unwilling to even look Northward, and certainly not if I won’t even take a single step. But if you are willing to just decide your course, then you will have made the hardest decision — you will already be on the right road. And then, all you have to focus on is taking one step after another.

To achieve Greatness you have to be willing to be Great. You have to face the enormity of that goal, full on. You have to decide to do what it takes. And then you just have to do it. But, if you aren’t facing the right direction, if you’re still waffling about the choice itself, it’ll never happen. You can wish for it, but you still won’t be getting any closer to your goal, because you haven’t really chosen it. Decide. Then do. That’s it. 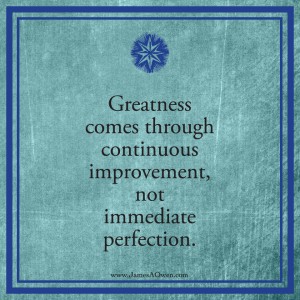