Most people – myself included – generally dread the coming of Monday. The reasons are as varied as they are meaningless. Reasons are just excuses for doing things we don’t want to do. For my part, it was Mondays in Winter I particularly dreaded, because the Studio – which is a massive large place – has not had heat since 2008. The book market – along with every other market – crashed that Fall, and it took a few years to just regain a bit of balance.

The immediate financial repercussions were that I couldn’t afford to keep the gas furnaces lit. And so we went without heat, but continued to work. We could heat my office just enough for me to draw, but that was about it. Everyplace else in the building was freezing. Now, money was still coming in – sometimes a lot – but I still had (and still have) a lot of obligations to pay from lessons I learned earlier in the century. Those had to come first – which meant that having the cash to turn on the furnace had to wait until I did a new book deal sufficiently large enough to justify spending that money AFTER still maintaining payments to all the people I needed to pay. And this meant continuing to work through the winters without heat, until I could make the right deal happen. And, at the end of last year, I finally DID.

It is Monday, and I am drawing pages for THE FIRST DRAGON, writing FOOL’S HOLLOW, and editing THE BARBIZON DIARIES. And it is WARM. And I am content.

Many people see only the struggle, and talk themselves out of trying before they even start, saying things like “I could never do THAT.” And sometimes, it IS hard. More than hard. Just last year, in a particularly awful week, I was dealing with some internet crap, behind on my art, trying to keep some things together at my house, was overloaded with some bills, and had just been told that one of the book projects I was working on (to hopefully sell fast for Big Bucks) was going to be a very, very difficult sell.

That night, I asked three friends of mine, in different parts of the country, to check in on me. Hourly. As the earth revolved and one would retire to sleep, another would step in. With friends making sure I was keeping myself pulled together, I managed to work through the night in below zero temperatures, and I finished the work I needed to do. Then I pulled myself up, switched gears to the next project, and later in the year made the biggest single deal of my career.

Things happen. Some, we cause to happen, others just happen. The more you cause to happen yourself, the more the world must respond to you instead of the other way around. Decide what you want, then pay the price to make it happen. After you win, the struggle is just a lesson – and lessons are nice to reflect upon when it’s seventy-five degrees in your office in the middle of Winter. 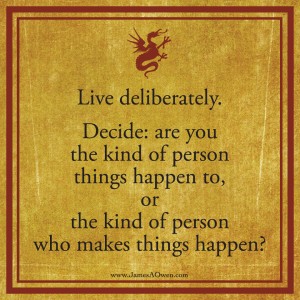