When people visit my private working office at the Coppervale Studio, they see that it’s chock-full of books, comics, and art. Closer observers who know me better realize that most of the stuff in here is from the mid 1980’s — otherwise known as the formative years, when I was deciding that I wanted to write and illustrate books for my career. The books, comics, and art that inspired me as I worked then are the same books, comics and art that inspire me now. That was a happy, no-pressure time to make pictures and create stories. I did it for the love of it, for the sheer joy of doing what I really wanted to do most. And for the most part, that’s what I STILL try to do.

But sometimes, you misplace the joy of it. It doesn’t matter what “it” is — it matters that you once loved to do it, and probably still do. But the one pitfall of the thing that you love doing becoming your job is that it becomes your JOB. It’s WORK. And sometimes, no matter what it is you do, work can be a bit of a drag. You get wrapped up in concerns about what the editor wants, and what the publisher wants, and what the marketplace wants, and what your readers might want, and your advance, and your next advance, and your royalties, and the bills that are due, and that problem with the chick in Chapter Eight, and basically all of those things that make you question what you know to be true, which is that you’re a creative GENIUS.

We all are, or at least were, at one time. When we were kids, all we needed to prove we were creative geniuses were a fresh box of crayons and any surface that could take colored wax. When I got older, all I needed was a pile of comics, some paper, pencils, and a Sharpie.

The factor in common to both times was that I was having FUN. That’s a key part of not just being a creative genus, but being really good at whatever you choose to do.

If the thing you’re doing is 1) something you CHOSE to do; and 2) something that you’re miserable DOING, well, then, the problem and the solution are clear: either STOP doing that thing and do something else that WILL be fun; or learn to get out of your own way so that you can have fun doing whatever it is you’re doing, which is what will let your creative genius back out again.

I’d like to not be an idiot, so I’m getting out of my own way and reminding myself that this is FUN. Then I’m going to fix the thing with the chick in Chapter Eight. I think it’s gonna be fun. In fact, I KNOW it will be.

Figure out whether or not you’re in YOUR own way, then stop doing that. And I think you’ll suddenly have a lot more fun too, no matter what you do. 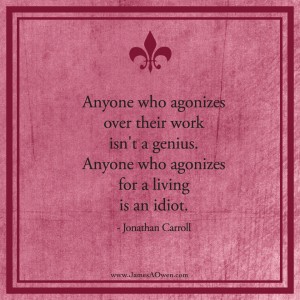