I’ve become much, much more selective about the television I watch, and so am basically ignoring the new season of American Idol – but that show still provides the best example of today’s Meditation: You don’t get what you want – you get what you earn. Contestant after contestant has gone on that show, performed, then gone down in flames (or tears) because they simply weren’t prepared.

I think talent DOES play a part. But the smallest degree of talent can be honed, and trained – and made very presentable. IF one does the work. And most of those people – many of whom viewers make fun of, but some of whom are simply tragically clueless – don’t put in the work. Three seasons into the show, it became obvious what the bare minimums were: dress nicely; be polite; be prepared; remember the words. Things like that. To me, it was even obvious how to get through the first round at minimum (Hint: if you can sing at ALL, and are nice, you got Randy and Paula; to get Simon, all you had to do was RELENTLESSLY practice to be able to perform “Unchained Melody”, his favorite song, well). Still, very few contestants ever did that.

And, as they were told the bad news, almost to a person they would stammer something about how badly they wanted it. Which isn’t really true. If they REALLY wanted it, they would have been completely prepared. They would have put in the work. In some cases, the ability just wasn’t there – and that’s a different lesson to be learned – but mostly, it was clear whether or not the contestant had prepped, and worked, and PLANNED to win.

This is true with nearly any endeavor. Wanting it isn’t enough. You have to work, to win. And if the work is too much, then you’ve just gotten a gift – you discovered something you don’t really want. What you do with that knowledge is entirely up to you. 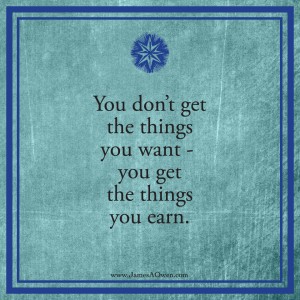