The proper path of Awesomism is to seek to become better than you were the day before, so that you may embrace your greatness in the service of helping others to find and embrace their own.

Two years ago, on this same weekend, I was standing in my front yard with my son Nathaniel, and we heard a noise coming from the nearby rodeo grounds/ballfield complex. It was the sound of the Little League Opening Ceremonies – which we had missed, COMPLETELY. We had also completely missed even the chance to get him on a team. I didn’t even know he was all that interested, or had wanted to play. And now it was too late – he covered it well, but there was a lot of hurt underneath, and it was horrible and agonizing to me that we had missed this opportunity to let him participate in something I had done at the same age, and which would have been as meaningful to him as it had been to me.

For the next year, one of my great causes in life, to which I devoted and maintained a tremendous focus of will and attention, was EVERY date that was important to the beginning of the new Little League season. For signups, we we there the first hour; for Opening Day; we were there when they were just setting up. I attended every practice, and only missed one game because I was away. We played catch every afternoon and weekend we could, because he wasn’t that skilled – having not had much practice – and so in terms of overall ability, he was WAY behind most of the other kids. But he loved it, listened to his coaches, worked hard, and had fun. At the end of the season, he was a decent first baseman, an okay fielder, a so-so hitter. But he had been in the game.

This year was different. I made sure to stay on top of all of the parent stuff: signups, schedules, planning for practices and games, and getting him what he needed in terms of equipment. But what was different was he had found his drive; his calling to greatness; his path to one part of his own Awesomism.

Nathaniel decided he didn’t just want to PLAY – he wanted to be the PITCHER. The leader of his team. And so for MONTHS, he has been studying, watching videos, and relentlessly practicing. He broke a baseball, wearing it out. I bought him twenty more. We play catch every chance we can, and I set up pitching targets for him. And he has WORKED. And now, he can throw every conceivable kind of pitch: fastballs, sinkers, sliders, curves. He can throw a knuckleball with five different grips. And I prepared him by telling him he now has the ability, but he needed to tell his coach, simply and directly, that he WAS the team’s lead pitcher, full stop. I said he needed to set up the expectation in their minds that he could do it – and then prove he COULD. And he DID just THAT.

He is AWESOME. And he IS the starting pitcher on his team (which we thought was the Giants – but it’s the Diamonbacks!) He can hit okay. He can field. He’s a GREAT infielder. But when he pitches, he is obviously in the flow of his greatness. And HE chose that. All I did was make sure his path was clear. All I had to do was pay more attention, and do better at my job as his dad – then let him do his thing.

Now, when I remember the regret and remorse I felt that day when I realized what chance had been missed, it stings less – because I took the chance to make it better, to help my boy do something he wanted to try, and now loves, and is becoming AWESOME at doing. That’s my path of Awesomeism – not just finding my own greatness, but in helping those I love to find theirs, and doing whatever they need to help make it happen.

Go forth, and help others find their Awesome. That’s where you’ll find yours. 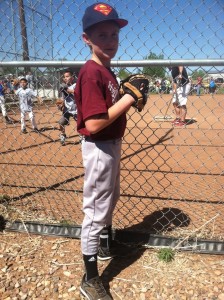