A lot of notable people have made very public statements about how having great failures is a necessary part of learning: whether it’s in business, or the creative arts, or whatever else, they all frame it as a noble rite of passage. What they often fail to mention or if they do, explain to any degree, is that it is often very, very painful. Painful emotionally, and spiritually, and sometimes economically, and very often even physically.

Failure is a necessary rite of passage to any kind of extraordinary success. Period. And I think it is as important to talk about failures as learning experiences as it is to talk about successes which can serve as examples of the Possible.

A great deal of the stress and pain and grief and trouble I’ve experienced in my life came about because of my tendency to overreach — but so have many of my happiest moments, my most joyful moments, and almost every success I have ever had. I cannot lessen the one without lessening the other. Less risk definitely lessens the chance of failure — but it also greatly reduces the possibility of an extraordinary success. The equation has to balance.

Failure of a project or venture is only damaging to you if you don’t learn anything from it. If you learn, and progress along your path towards your goals, then you’ll realize the experience was necessary for you to learn what you needed to learn. But, if you use the experience as a reason to quit, or to garner sympathy or pity from others, or worse, don’t actually change any choices, which may result in repeating the failure — then yes, all you’ll be processing is the pain. Pain of loss; pain from fear; pain from humiliation; and the pain of realizing that your own choices are keeping you from taking another step towards your own greatest self.

How you choose to deal with the repercussions of the lousy choices you’ve made is also the measure of your personal integrity. If you make bad choices, you will hurt good people. It can happen, and when it does, all you can do is apologize, try to make reparations in full so they won’t have suffered a loss because of your learning experience, and then do your best to make better choices. Will you be able to satisfy everyone you’ve ever been involved with? Not likely. Some people can become so fixated on having been disappointed or damaged that they may see any efforts on your part to repair what was broken by your bad choices as completely unsatisfying — and that’s okay. That’s their battle to fight with themselves, not yours. All that is required of you is to take responsibility to do what you promised to the best of your ability and to try to do better in the future. That’s all.

You can also tick off some really bad people, who have been so hobbled by their own fears of failure that they would do whatever they could to push you towards failure, and paint you as irredeemable because of the bad choices you may have made. Those kind of people may be prominent, respected, and apparently successful — none of which may have anything to do with their integrity, or lack thereof — and having dealings with such people is its own kind of learning experience. Think of Henry Potter and George Bailey in the movie “It’s A Wonderful Life.” Potter was rich, powerful, and apparently successful — and had very little of anything truly meaningful in his life. George was a dreamer who never really got to pursue his dreams, but he was perhaps one of the great examples of how to truly take responsibility. He took care of everyone around him and, in a moment of crisis, took the weight of a mistake he didn’t even make.

Potter would have loved to destroy George Bailey, but he couldn’t, because George was so good at taking responsibility that in the end, his influence was greater than Potter’s.

You will attempt many things, and fail at a lot of them. If you attempt great things, your failures will be massive. If you cause pain to others in the process, it’s their right to judge you until you make the reparations you are able, and do your best to choose better. After that, it’s up to them what choices they want to make.

However, if you are ever threatened by someone of Potter’s ilk, who want to elevate your mistakes to the level of character flaws, know this: you cannot fight someone like that on their own terms, flinging defenses and counter-accusations and vitriol. You have to fight them with the weapons they cannot ever truly defeat: your integrity, and your sense of responsibility, and your willingness to improve the choices you make.

At the end of “It’s A Wonderful Life” George’s brother Harry called him The Richest Man In Town because so many people loved him. I think he was also the Strongest Man In Town because even at his moments of greatest struggle he chose responsibility. If you can do that, no matter what occurs in your life, then there are no failures — only chances to learn. And that is true strength that can never, ever, be diminished. 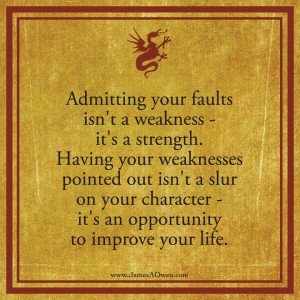 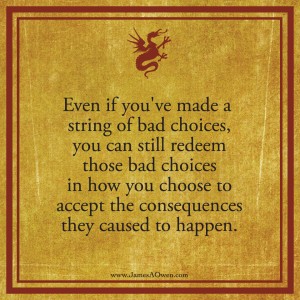