I live my life largely through metaphors — it’s the natural result of having read a lot of Ray Bradbury books. Metaphors are a great way to teach certain concepts — but in a lot of ways, our world is becoming much more literal, and it sometimes seems that there are fewer and fewer people who choose to instruct through stories. When I chose the title for the first book of Meditations — Drawing out the Dragons: A Meditation on Art, Destiny, and the Power Of Choice — it was done deliberately for a number of reasons. For one thing, my primary authorial reputation is now tied pretty tightly to Dragons. I have no complaint about this: books about Dragons have paid my mortgage for seven years. So, it made sense for my first nonfiction book to have “Dragons” in the title; ditto for the illustration on the cover, which evoked the Dragon covers of my Imaginarium Geographica books.

What I hadn’t really expected was that a number of readers — not a huge number, but more than a few — missed the metaphor of the title (and glossed over a keyword or two) and assumed this was somehow an instructional book on drawing, or drawing Dragons, or on Starting A Career Drawing or Drawing Dragons, which it isn’t, not really. It touches on all of those things, but only by way of example; I discuss each of those subjects in the course of talking about how I went about learning to do all of them, which is useful as a general example, if not necessarily so as a specific map that anyone else should follow. (Also, the subtitle is a big giveaway as to what the actual content of the book is.)

To Draw out your Dragons means to deliberately decide to confront your own fears in the course of making choices about the direction of your life — and there’s no specific roadmap to tell you how to do that, because everyone’s course is different, and everyone’s mileage varies. I could be very specific about things like how I got my first design job — except that publisher no longer exists, and the market was vastly different then. Any attempt I make to offer specific, concrete directions for modeling a career after my own and suggesting that the plan is worth following will be both fruitless and ultimately useless, because everyone’s needs and choices and opportunities and obstacles are going to be different.

However, if I offer, through stories, examples of how I pushed through the obstacles I faced, and made deliberate choices about how to build a career withing the circumstances I was living in, then that example has value which is timeless — because it can be used by anyone trying to make choices about their life, not by trying to duplicate what I did, but by knowing that someone followed a similar path, and found a way through. Sometimes, just knowing something is possible is infinitely more valuable that being told something is possible if you confine yourself to tracing the choices made by someone else. That rarely works, because if something unexpected arises, you won’t have another map to consult to change your course.

That’s why what is important in teaching through stories, in sharing via metaphor, is not to give people the map you made, but to help them realize that they are capable of making their own maps. That’s what Drawing out the Dragons is really all about – even if there is a Drawing Dragons worksheet in the back. 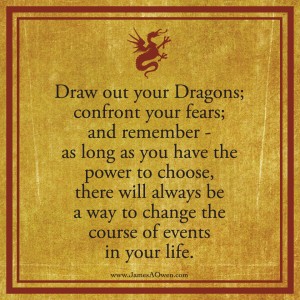