As I was preparing to come to the Studio this morning, something sparked a memory of a time nearly a decade past – and the memory wasn’t entirely good. Still, for whatever reason I allowed it to grow stronger in my mind, as layer after layer revealed itself in that particularly nasty confection, and in a matter of minutes, my mood had grown somber and dark.

Somber and dark, over a memory of a situation that is long past resolved; has no real bearing on my present; and which has almost zero relevance to anything having to do with my work, family, friends, or career, other than the lesson I learned about my own character which sparked the memory to begin with.

Realizing this, I went back to that first memory and began to build something entirely different, and much more rich and fulfilling: layers and layers of memories of the better path I took as a result of that choice, that moment of learning. Memories which contributed in a huge way to the life I enjoy now. And once more, in a matter of minutes, both my mood and my demeanor changed, but this time for the better.

We humans have an extraordinary gift: we can convince ourselves of anything. Anything. Whatever we choose to focus on receives a tremendous amount of energy, and everything in our being then becomes directed towards bringing what we think about from possibility into reality. The trick is, it doesn’t matter what that object of our attention is – all that matters is how we choose to direct the attention, and towards what.

It’s like the old story about the twin boys who are given a roomful of horse manure for their birthday. The first kid sits down crying that all he got was a roomful of manure; but the second kid leaps up joyfully and starts digging into the pile, proclaiming, “With all this horse manure, there has to be a pony in here somewhere!”

Is it likely? No way to know unless you dig through it. But one thing is certain: if you don’t go looking for a pony, you’ll never find it. I’ve plowed through a lot of horse manure in my life, and none of it matters, because it was never, ever, what I focused on. 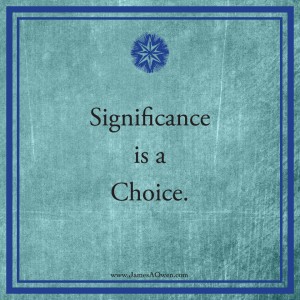