Most people who don’t succeed at what they attempt to do fail because they didn’t expect to win. They expected obstacles; and opposition; and perhaps a massive struggle. They expected it to be hard — and here is part of the problem: their focus is more about not losing than it is on simply winning.

Not losing is not a terrible thing — but it isn’t the same as winning. Fighting a valiant struggle against impossible odds — and still failing — is notable; but not as notable as continuing the fight until you win. Not losing is the highest setting of lowest common denominators — and it is still far, far below the only setting which really matters when you are pursuing that which you really want most: succeeding.

Your expectations set the tone for every action you take, every choice you make, and every way in which your supporters will rally to support of you and your cause. Step One: expect to win. Step Two: do everything that is required to make it happen. That’s it. If all you are doing is trying to not lose, then all of your attitudes, efforts, and preparations will reflect that — and that is what people will see and support accordingly.

To not lose, all you have to do is never try. To win, you have to give it everything you have until the job is done. 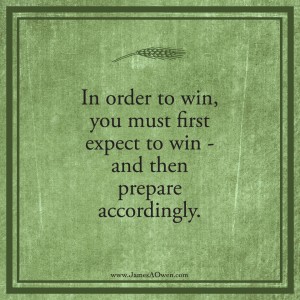