One of the core questions of the beliefs that guide my life is “How can I inspire you to be your best self?” and I try very hard to say and do the things that will help inspire the people around me, especially those whom I care about most. And every so often, it is reciprocated in amazing ways.

Last week in Colorado, at the annual Superstars Writing Seminar where I’m one of the instructors, I’d planned a lunch with my good friend Joshua Essoe, during which he planned to share something very important with me. Something so important, one of my best friends, Kristin Luna, teased me about it on a nature walk earlier (to her delight and my distress) saying it was something that would be “life-changing.” At the lunch, Josh and I talked about a lot of stuff, personal stuff, book stuff, those sorts of things — but when the initiator of this apparent conspiracy, my Apprentice Victoria D. Morris showed up, he suddenly became all about these packages in his backpack.

Josh started a seemingly rambly story about going out in the city (L.A.) on a treasure hunt in the middle of the night; a story complete with encounters with other treasure hunters, and getaway cars manned by lookouts (in case the authorities should happen by) and a moonlit photo of himself in a derelict basement — and all the while, he is removing from his pack an odd object in bubblewrap, and two large, flat, parcels wrapped in leather.

He kept talking as he unfolded the first piece of leather. Inside, wrapped in green paper, were three pieces of what looked like a yellow wall. The bubble-wrapped object was a wicked cool dragon’s head display dish, filled with small reddish chunks of masonry. And the last leather parcel he unfolded contained a brick, with a chunk of wall from a corner that showed the same yellow paint as was on the other chunks of wall, as well as a lovely tile. And I still had no clue what any of this signified until Victoria put a small engraved plaque in front of my face, as Josh, in an expert Jamesian manner of exquisite delivery and timing, spoke, mirroring the words on the plaque, “…salvaged, for you, from the Cheviot Hills, Canary-yellow home…

Speechless, teary-eyed, and trembling was my reaction. And I was touched, impressed, and absolutely inspired.

I’d posted photos of the demolition-in-progress of the house, and Vicky immediately contacted people in LA to see who could do a miracle run to find something that was still there to save. Josh was able to do it, and got there one day before the house was leveled. I love my totems. I believe they are infused with the energy of those they represent. And these things, sitting near me, are infused with a remarkable power.

Those items will have a treasured home, in a display near the letters and books that were gifts from my spiritual father, Ray Bradbury, and my gratitude for such a thoughtful gesture and effort will never leave me. Thank you, guys. I love you all. 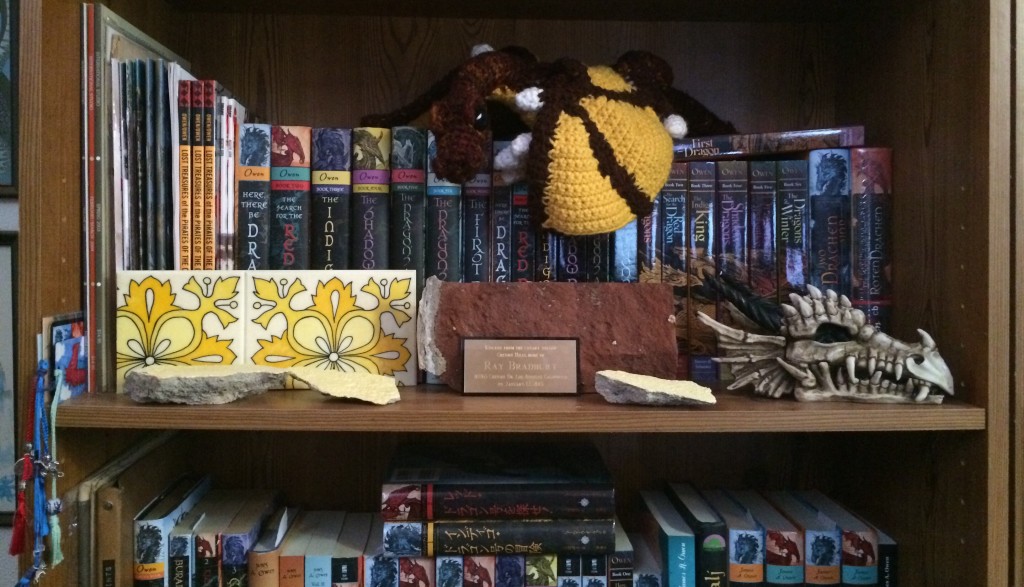